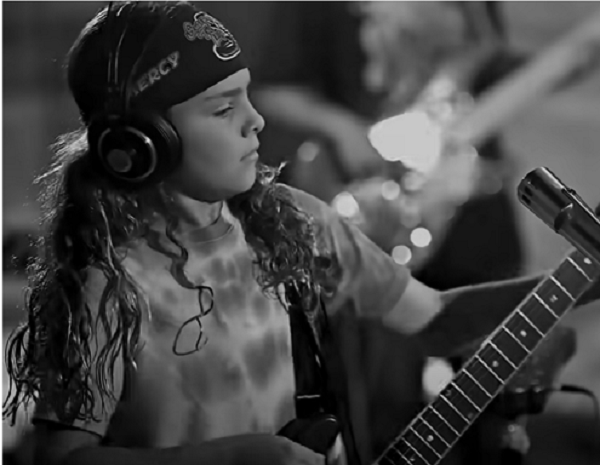 Champ Jaxon is an eleven-year-old aspiring blues-rock musician based out of Southwest Florida. Champ was born in New Bedford, Massachusetts in 2010 and his family relocated back to Florida in 2013 when he was three years old. He also plays a custom-build Blind Armadillo guitar, Red Bear, made by luthier Victor McGuire in Venice, FL. Additionally, he plays a 1959 Gibson Les Paul Special, a Gibson Flying V, a Gibson SG, and a Brad Paisley Fender Telecaster, gifted to him by Mr. Paisley himself.

Champ donated his own tips, (July 2021) for a benefit to his school’s music program. One of the first, and most frequent venues Champ has performs at, Nav-A-Gator matches what he earns, resulting in $3,500 raised. Furthermore, the school purchases a Digital Audio Workstation because Champ wants all of the kids. So, all the kids have the be a part of the involvement in some way.

Champ enters the Marshall Tucker Band, “Can’t You See Challenge” on Facebook (May 2021). Champ’s video submission of him performing Can’t You See in Nashville, is shared by The Marshall Tucker Band on Facebook. Two weeks before the contest ends, Champ is given the opportunity to meet the band. Not only is Champ given a VIP table, Doug Gray, himself- asks Champ to perform with them that night. However, if he did, it meant being taken out of the running for the competition.

Champ picked up his guitar. His pure love of music takes him directly to the stage and performing with them is the real prize. When asked to stay for the encore- 10-year-old Champ Jaxon, had one statement. “Let’s jam in the key of A!” A mere two months later, The Marshall Tucker Band needed someone to fill in on lead guitar, for several gigs. Knowing everyone that they know, they called Champ. By performing with The Marshall Tucker Band opening for Alabama in Birmingham, Alabama at The Oak Mountain Amphitheater (August 2021).

Champ’s first single releases on November 12, 2021, and his debut album follows on Dec. 10, 2021, Champ’s bandmates include his father, Nate Winkler, on rhythm guitar, Brent Adam on drums, and Nick Rosado on bass guitar.

Keeping the Blues Alive
To learn more or donate to Keeping The Blues Alive, visit our website at https://keepingthebluesalive.org/

Lucille and B.B. King – Photo of The Week!