While Les Paul and Paul McCartney are taking a moment to make sure Paul’s guitar is perfect shape. Some photographer is lucky enough to capture these two iconic musicians together.  Furthermore, these two artists are hanging out in 2007, for an NPR interview titled “Les Paul Chasing Sound” At 92. A pioneer of the solid-body electric guitar, his techniques and ideas serve as inspiration for the Gibson Les Paul.

At eight, he begins playing the harmonica. After trying to play the piano, he switches to the guitar.  By age thirteen, Paul is performing semi-professionally as a country-music singer, guitarist, and harmonica player.  Meanwhile, during this time he invents a neck-worn harmonica holder. Even better is that it allows him to play both sides of the harmonica hands-free. Furthermore, he uses it while accompanying himself on the guitar. Today, his original design is still active.

Throughout his career he’s mostly plays jazz and popular music but, he also plays country as well.  More so, he’s credited with many recording innovations. Although he is not the first to use the technique, his early experiments with overdubbing, delay effects such as tape delay, phasing effects and multitrack recording are among the first to attract widespread attention.

His innovative talents extended into his playing style, including licks, trills, chording sequences, fretting techniques and timing, which set him apart from his contemporaries and inspired many guitarists of the present day. During his lifetime, he also performs and records with his wife, the singer and guitarist Mary Ford. Lastly, in the 1950s alone, they sold millions of records.

SLASH – Photo of The Week 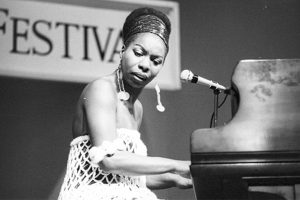